Thailand's UNESCO entry Sukhothai shares a triple bill with the ruins of Kamphaeng Phet, to the west. and the ancient city of Si Satchanalai to the north under the combined (and imaginative) name of Historic Town of Sukhothai and Associated Historic Towns. The former lies some 80 kilometres southwest of Sukhothai and the latter over 50 kilometres north and while there are historical similarities between the 3 there are also substantial differences and we can't help but feel Thailand may have got something of a lazy deal from UNESCO  in their World Heritage listings.

Indeed the site of Si Satchanalai already combines 2 separate and distinct ancient city sites in its own right with a walled city enclosed within a narrow loop of the Yom River to the east (today known as Chaliang),  and walled and moated Si Satchanalai situated a short distance to the west. While all sites today reveal principally 14th-century, Sukhothai-period, constructions, their history diverges.

As the name suggests Sukhothai was the most important city and capital of the 14th-century Sukhothai kingdom and the walled town and surrounding areas display the greatest number of historical sites. Several of the major temples, including Wat Mahathat, Wat Sri Sawai, Wat Phra Pai Luang and San Tha Pha Daeng show evidence of having been adapted from pre-existing, earlier sites - probably dating from the late Angkor, Jayavarman VII period. However, Kamphaeng Phet reveals scant evidence in this regard and was perhaps mainly an outer defensive position of the capital against the perfid Burmese to the west?

Conversely, Si Satchanalai - in particular Chaliang, - reveals extensive Angkorain remains and it seems likely that this was the area's most significant settlement during the late Angkor period; the region being an important northern outpost for the Khmer empire during this era. Considerable excavations at Chaliang have been undertaken by Thai archaeologists in recent times and almost all temples show 12th-century foundations and artifacts including the main site of Phra Si Rattana Mahathat, while the nearby site known as  Wat Chao Chan is a semi-intact Jayavarman VII Arogyasala or Hospital Chapel. (Over 100 of these are recorded as having been constructed at key points throughout the empire during that king's  late-12th to early- 13th- century reign.)

It is curious that 2, separately walled, cities lie little more than a kilometre apart and evidence of more Angkor-period foundations at Si Satchanalai indicate that situation dates from before the Sukhothai period. (It's also highly likely that all these sites had already existed in some form for a long period as Mon settlements before Khmer control of the region.)

Wat Chedi Jet Taew, among other temples, displays Khmer origins while a nearby, hill-top site retains the Khmer name of Wat Phanom Pleung even today.  Unlike northeastern provinces such as Buriram and Surin, no ethnic Khmers inhabit this region of central Thailand so the name, meaning literally volcano - or 'fire mountain',  must be an old folk memory.  (As no-one could mistake this small sandstone hillock for a volcano, the term fire mountain could refer to the temple's original use as a Jayavarman VII period fire temple. (He also commissioned some 120 of these temples at important points throughout his empire.)

Historical debate still reigns but, whatever its origins, Si Satchanalai today is a spectacular and highly picturesque site. While Sukhothai is much better-known and more prestigious it is consequently much busier and the site has, to our minds, something of an over-manicured feel with neatly laid out paths and floral hedges as well as, and not least, having a major highway pass right through the centre of it. Si Satchanalai is lesser-known, much quieter, and presents a scenic natural parkland setting of meadows and mature trees. (Even a few of the iconic, giant sprawling ficus trees still decorate some of the temple sites.)

Of course, being Thailand, the temple sites and surrounding park are well-maintained but it certainly has a  delightful, pastoral feel and is also, even, a haven for birdwatchers.  We've included the UNESCO site of Sukhothai on our north tours for many years but after a  recent survey, we've decided to tweak the itinerary somewhat. We'll visit Sukhothai for sunrise - practical as it's a short drive from the hotel -  and then drive 45 minutes or so to Si Satchanalai for a cycling tour of the archaeological park. After a local lunch in the area, and weather depending, we can head back to the hotel to escape the heat for a while before returning to Sukhothai for sunset at one of the temple lakes. (The picturesque lakes and lily ponds are the one thing missing from Si Satchanalai.)

Sounds good? Then please check our Hidden Thailand - off the beaten track north Thailand tour which, vaccine-permitting - we're hoping to be able to offer later in 2021. 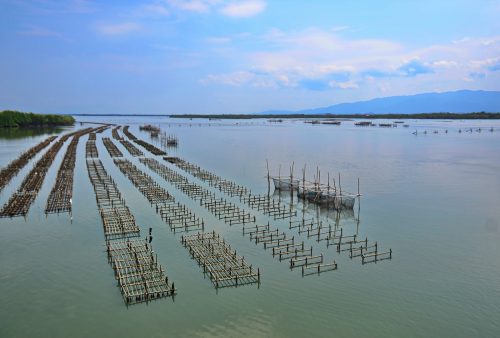