The Blue Hmong of Thailand

According to this article, the word for blue and green is the same in Hmong, though I reckon that probably depends on which Hmong dialect one is referring to and our White Hmong mate says that’s nonsense! There is certainly some confusion between Green and Blue Hmong though, and indeed the aforementioned article also categorizes the Black Hmong of Sapa as belonging to the Blue Hmong linguistic group. (Though Vietnamese local guides will tell you there are ‘Blue’ villages near Dien Bien Phu and Son La.)

China being beyond the range of this post, (we’ll look at Yunnan later), and with us leaning towards the classification of groups on costume rather than linguistic grounds, we’re going to refer to the Blue Hmong of Thailand’s Chiang Mai region as the most distinctive we’ve come across in that sub-group or ‘clan’.

We’re also assuming that all Hmong sub-groups originated from a similar area of Southern China and had far closer languages and appearances than before they migrated into scattered, often isolated areas of Southeast Asia.

Thailand’s Blue Hmong population is largely concentrated in the Doi Suthep-Doi Pui area, across towards Doi Inthanon and north to Chiang Dao. The Hmong of Nan and Chiang Rai Provinces are White Hmong.

Blue Hmong traditional gear is bright and distinctive with multi-coloured skirts, usually containing plenty of blues, violets and fuchsia with elaborately embroidered black tops but, according to themselves, the single defining clothing item is the small blue and white checked scarf! (You can just make it out in the pic below.) Odd because you’d almost imagine it was a recent addition and checks aren’t usually very Hmong.

Though not so widespread as the White Hmong their immediately recognizable appearance makes them one of the best known of Hmong clans and indeed the Hmong handicraft bags, skirts etc that you see in Chiang Mai’s night bazaar or Sunday market are all based on Blue Hmong designs. Cheers! 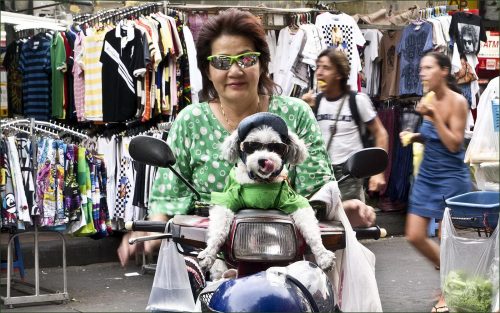 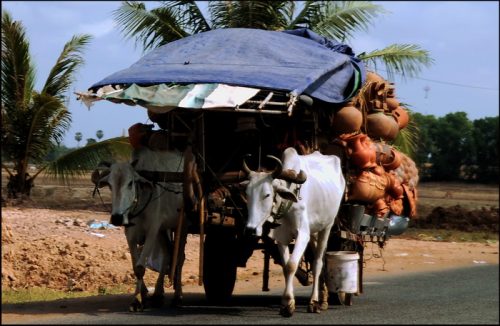 The road to Kampot