A description and photos of the route between Battambang and the Thai border at Pailin as travelled on our Ruined Cities, Tropical Islands family tour

To conclude our recent Cambodia Overland tour here’s a few pictures from the final section – the road to Pailin – which takes us from Battambang to the Thai border. The road is now more or less complete thanks to funding from the Chinese government and the 0 kilometres or so is easily done in 2 hours including coffee break. So a quick early morning whiz up the bamboo railway to blow away any cobwebs and we were off through the paddy-fields towards Phnom Sampeu.

Rising abruptly from the paddy-fields, the jagged limestone outcrop of Phnom Sampeu, although today very scenic, was sadly yet another of the country’s Khmer Rouge era ‘killing fields’ sites. The view from the modern pagoda on the summit – see above – is awesome but the climb up very steep, so only our more energetic groups attempt an early morning climb.

A few kilometres down the road is the small market town of Snoueng which, time-permitting makes for an interesting leg-stretching spot. Immediately at the side of the road, to the right upon entering the village, is a small sandstone temple with some very interesting and well-preserved lintels.

Sometimes mistakenly described as a gopura (it only has one, east facing, doorway), it was the central shrine of a small, probably Suryavarman I period temple. The piles of sandstone blocks littering the surrounding area means there would have been other buildings but these days it’s impossible to get any accurate impression of the layout.

Behind the ruin is the grounds of a modern Buddhist temple and if you follow the path behind the temple you’ll see a further 3 brick towers. These are older than the roadside temple, (possibly late 10th-century – Rajendravarman period?), and are in good condition with a remarkable red sandstone lintel on the central tower. Quite amazing to find such an immaculate lintel in such an out of the way place! (The hole in Indra would have been made during carving to facilitate transportation and would have been filled with a stone plug.) A small Angkor outpost but apparently inhabited over a long period and which probably served to guard a route over the hills to the important port of Chantaburi as well as a trading post for the tribes inhabiting the surrounding jungles. (Must have been a bit of an Angkor ‘Far West’ town!)

From Snoueng the road winds up into the hills and much of the surrounding land is still heavily mined. This was the frontline between KR forces in Pailin and govt troops in Battambang. as with Anlong Veng, Pailin was nigh on impregnable with  hills overlooking a heavily mined road up the valley and KR forces only eventually laid down their arms in the mid-90s after the offer of amnesty. The timber and gemstones of Pailin district, (Pailin means sapphire in Khmer and Thai), also funded the KR war effort though there’s precious little of either left these days. (Whilst British army camps over the border in Thailand provided aid and training to the KR soldiers.)

Anyway, these days Pailin is a fairly prosperous, though unattractive, agricultural centre so after a coffee stop at the pleasant Bamboo Cafe we headed on to the Thai border at Phrum.

Khmer border police here are usually laid back and friendly but imagine our surprise when we also met with smiling helpful Thai immigration officials!? The remote Pong Nam Rong border crossing not being a prime posting used to mean grumpy awkward officials but staff have now been changed and immigration procedures were swift and good-humoured. Anyway a brief stock up on duty-free wine and razor blades  (why are the latter so much cheaper in Cambodia?), and we were off on the road to Bangkok – bye-bye Cambodia – see you in another week! 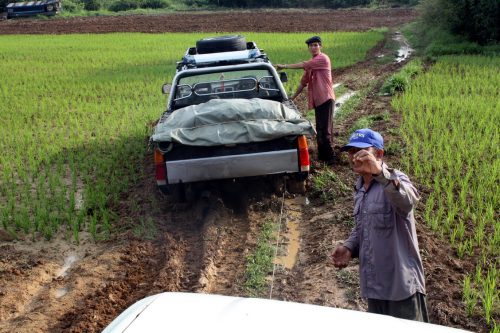 The 'Road' to Battambang, Cambodia 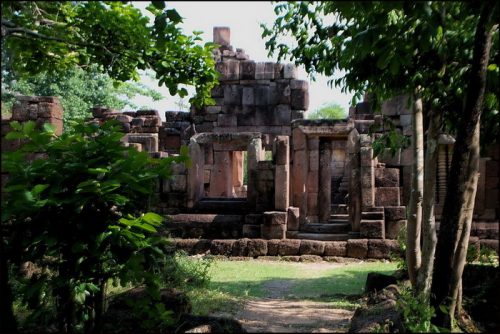