Malaysia’s contribution to the UNESCO world heritage site list includes 2 cultural sites in the Peninsular and a national park each in Borneo’s Sabah and Sarawak States. A further 2 candidates in the tentative section adds a second national park in Sarawak plus the famous Taman Negara in West Malaysia. Considering the country’s rich cultural heritage and stunning landscapes that’s a relatively poor return though the Malaysian powers that be’s apparent haste to turn the entire country into shopping malls and oil palm plantations maybe doesn’t help? Prioritizing modernization of the cities over preservation of historic architecture does not World Heritage Sites create and it was great to see George Town – one of the few Malaysian cities which seems to some extent to have reversed this trend – receive UNESCO status in 2008. Yes it was a joint inscription with Malacca, (Melaka), though the latter just possesses such a great architectural stock that despite the appalling development the city council haven’t manage to ruin everything.

Hideous Comtar aside George Town, Penang’s development has largely taken place in the suburbs leaving much of the superb historic centre; Victorian buildings and the vast Chinatown relatively intact though bear in mind that much of KL and other Malaysian cities used to look like this until recently. Borneo-wise Sandakan and Kota Kinabalu both suffered catastrophic bombing during WW2 though historic, relatively intact Kuching Town in Sarawak needs to be on that list asap!

The second spot on the cultural list is Perak’s amazing Lenggong Valley archaeological site which covers nearly 2 million years of history and reveals the oldest records of human habitation outside of Africa. Lenggong is just north of Ipoh which incidentally is another town with some great old architecture.

Fortunately, despite government efforts, not all of Borneo has been turned into oil palm plantations and there are still some fabulous wild areas left with Gunung Mulu and Kinabalu National Parks being two of them. Kinabalu in Sabah covers the area around the 4,000m mountain of the same name and is renowned for its wide range of habitats and correspondingly high biodiversity. Mulu is in northern Sarawak State near the border of Brunei and is equally reputed for high biodiversity as well as its world famous caves and limestone scenery.

The tentative list sites include Lanjak Entimau Wildlife Sanctuary/Batang Ai National Park in Sarawak State which at over 2,000 sq kms is currently the largest protected area in the state and probably needs as much additional protection as it can get to avoid encroaching rubber and oil palm plantations. The second proposition is the aforementioned and well known Taman Negara National Park in West Malaysia which includes over 4,000 sq kms of low land dipterocarp forest, hill dipterocarp forest, mountain oak forest, montane evergreen forest, peat forest, riverine forest and limestone scenery and is home to, amongst other species, the critically endangered Sumatran rhino. The popularity of the park has put it under pressure and there is some room to expand the park into neighbouring areas such as the adjacent Kenong Rimba State Park which would improve matters and create a decent sized protected region in the heart of the Peninsular.

An even larger area of continuous forest, Belum, lies further north in Perak State though and is probably in even more urgent need of serious protection since it currently only has state park not even national park status. Much of the core area of this incredible site is largely untouched 130 million year old forest and includes all of Malaysia’s 10 hornbill species and a large elephant population. The park reaches north to the Thai border where it connects to Thailand’s Hala Bala National Park and Perak State  government’s logging ban is a major step in the right direction. Unlike Taman Negara Belum has a large Orang Asli population and is little touched by tourism. This is surely what world heritage is about?

So get Kuching on the culture list – perhaps have a look at some of KL’s historic areas such as Merdaka Square and why not the old British hill-station, tea plantations and unique flora of the Cameron Highlands as a combined cultural/natural site? In terms of natural heritage any parts of Sabah and Sarawak not yet logged including the magnificent Danum Valley needs sticking on the list asap whilst Belum has the potential to become the best preserved area of primary rainforest in mainland Southeast Asia.

Kinabalu, Mulu, Danum and Kuching are all featured on our Borneo Adventure whilst George Town, Cameron Highlands and Belum Forest are included in our award winning Malaysia, Coast to Coast tour. You can find a list of all our Malaysia, including Borneo tours at this link. 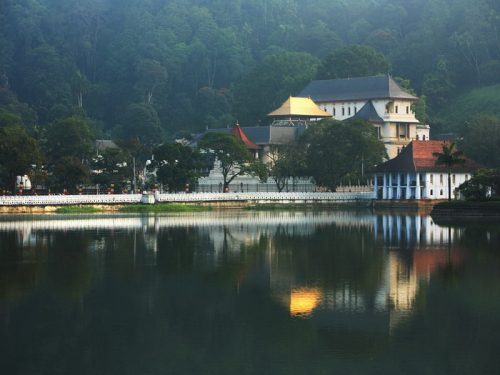