That’s aerial as in being high up rather than actually in an aeroplane since we took these George Town Penang views from the top floor of the town’s Komtar. Think it was the 65th floor – more of a helipad than a ‘floor’ as such since it consisted mostly of steel mesh rather than solid concrete – and we have to admit, for us, a truly terrifying visit! We’d received special permission from Tourism Malaysia since the top floor is not usually open to visitors though if we understand correctly negotiations are currently underway to perhaps open a viewing platform on the 64th floor?

Now Georgetown, or George Town as we’re reliably informed (here), the main town on Penang Island, was recently declared a World Heritage Site by UNESCO – a long-overdue recognition we reckon. Actually a joint listing with Melaka (Malacca), both sites show a wealth of historical architecture from Portuguese and Dutch in the case of Malacca to the many fabulous Victorian period buildings and extensive, well preserved Chinatown of George Town. Have to confess we’ve never been big fans of Melaka City’s development projects and the peculiar looking, dead straight waterfront, created by land reclamation, abutting on to the historic old town centre is frankly an abomination. Why they couldn’t have reclaimed land on which to build their shopping centres and office units jut a few kilometres out to the edge of town is beyond us and the old historic port area is now separated from the sea by a huge car-park and superstore complex – shame!

Anyway, we haven’t come to damn Melaka but to praise George Town where, on the whole – with the obvious exception of the 70s concrete shopping centre that is aforementioned Komtar – the historic town centre has remained relatively well preserved as you can see in this photo of rows of Chinese shop-houses above. (We reckon that’s Lebuh Kimberly – closest, left to right; followed by Campbell Street and Chulia Street beyond the mosque – though we wouldn’t swear to it!)

We’re going to pass on the above one since we can’t remember which direction out of the 360-degree vista we were facing, (see map here), and the total labyrinth of red-roofed Chinese shop-houses can be pretty confusing. (We’ll do a separate post with some ground-level shots of some of the fabulous, restored shop-houses).

Off to the west is Penang Hill – which we don’t seem to have photographed so maybe it was in the clouds that day – whilst south looks towards the airport and spectacular Penang Bridge and north and west provide views of the busy commercial and naval port of Butterworth on the mainland.

Also in the above photo, you can make out on the waterfront the famous clan jetties of George Town – a series of wooden walkways, lined with stilt houses, each constructed by a different Chinese clan or extended family, and jutting out into the sea to facilitate, and help keep discreet, trade with the mainland and offshore junks and ships.

Chinatown encompasses the whole of central George Town with the Queen Street, King Street area forming Little India, whilst the north east corner, site of the original settlement, is the location for most of the spectacular Victorian-era buildings such as the clock tower, city hall, museum, St George’s church, Fort Cornwallis etc as well as being the port for passenger boats heading to Langkawi and Medan in Sumatra.

It’s a truly fascinating town which is why we chose Penang and Georgetown over Melaka to include in our Malay Peninsula, itinerary. Our itinerary includes a walking tour of some of George Town’s historic sites with the great Penang Heritage Trust and a day out to nearby Penang Hill and Botanical Gardens. 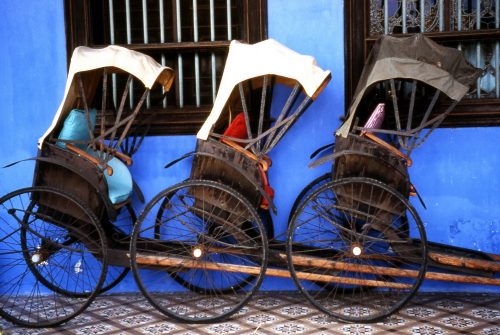