Lying just a kilometre away from Wat Phu, the small Angkor period temple of Nang Sida, Laos, does tend to get overshadowed by it’s prestigious UNESCO World Heritage neighbour. After hiking up and down the steep steps at Wat Phu few visitors are going to be bothered to head off into the dusty surrounding scrub-land to visit a ‘lesser’ temple site and most head sensibly, straight for the nearest shower and or cold beer.

Things have got worse of late after UNESCO recently moved the car-park about 1 km further away from the site, necessitating a long and shadeless walk to the temple itself. (Since the last car-park had already been re-sited some way away from the ruins anyway you wonder why another move was necessary, though they can now make more cash from the golf buggy type vehicles available to cart the lazier, or more infirm visitors from the minibus to temple.)

Anyway with thoughts of ‘mad dogs and Englishmen’ we bravely set off down the dusty track heading south from Wat Phu. In earlier times this was actually the old royal road linking the capital at Angkor to the important pilgrimage site of Lingaparvarta, (Wat Phu) and the route is fairly littered with adjacent ruins.  (See Angkor roads post.) Prasart Nang Sida lies 1km down the track with the Jayavarman VII period, (probably ‘hospital chapel’), site of Thao Tao another kilometre further on. (The above wooden bridge was built over the remains of a still clearly visible Angkor period stone bridge.)

Nang Sida would probably have been quite an impressive little temple in its day but is now in a rather sad state with the totally collapsed main tower now being impressive just for the sheer size of the pile of fallen sandstone blocks: it must have been a pretty tall tower when still standing! The eastern entrance porch, to what would have been the main shrine, is still relatively intact; there’s the remains of an outer enclosure wall and very long causeway but what saves the site for the casual visitor is probably the setting with the wooded hills behind forming a picturesque backdrop.

Considering the state of the ruin and the lack of carvings, (though rummaging through the pile of blocks ought to turn up a lintel or 2), it’s difficult to date the temple but as with many, it was certainly added to over different epochs. We’d assume the main body is contemporary to the larger Suryavarman I period buildings at Wat Phu though the long and partially raised entrance causeway is reminiscent of Suryavarman II constructions.

Interestingly a very well preserved carving had just been dug out of a shallow hole in the ground next to the temple – perhaps by a bored cow herder – and since this priceless object is currently just still sitting there UNESCO might want to be informed. Furthermore a second sculpture could also be seen poking out of the earth at the bottom of the hole.

The track is easy to follow as far as Nang Sida though if you want to continue on to Tha Tao you may need to ask directions. From the east side of the 2 Wat Phu ‘palaces’ take the track leading south. It’s actually closer than the car-park is, so not such a long trek and worth a detour if you fancy a stroll or have some time to spare. Not the most spectacular of Angkorian ruins but interesting nonetheless.

The Irrawaddy - Mandalay to Bagan 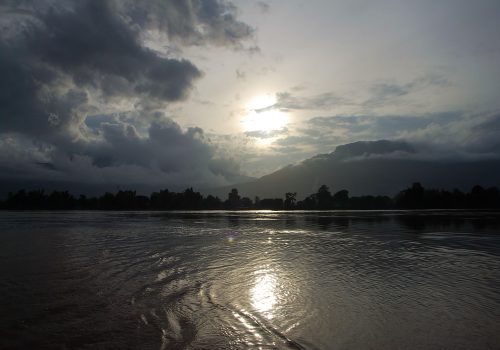