Prasart Kong Phluk – another very little-known temple a kilometre or so past the earlier described Prasart Chrei, situated just off the track that leads east from Beng Melea at the point where it passes the southeast corner of the ‘baray’. (And thanks again to Reinhart at Angkor Guide for confirming the name). The only problem being it was surrounded by minefields!  A M.A.G (Mines Advisory Group) chap we met in Siem Reap some time ago had told me that they estimated an 80% success rate in mine clearance whilst what he called ‘cowboy outfits’, (we’re guessing he meant the Cambodian military), might not get a more than 60% rate. (i.e. for every 10 mines in an officially ‘cleared minefield between 2 and 4 were probably still there.) We’d noticed ‘Area de-mined by…. in 2005‘ or whenever, signs at the side of the track and bearing in mind his comments thought, ‘ok, never know, better stick to the tracks then’!  Though the immediate vicinity of the temple was more or less cleared the problem was that since absolutely no-one ever goes to this temple there were no tracks to be seen! Upon seeing further ‘danger mines’ signs on the edge of the surrounding uncleared areas we then decided to beat a hasty retreat to the van and abandoned our ‘discovery’ of this particular remote temple.

Please note de-mining is going to be far more meticulous in areas or temples susceptible to be frequented by tourists. On our first visit to Beng Melea itself some 10 years ago the exterior of the temple was surrounded by warning mines signs with only a narrow path to follow but, with the opening of the temple to visitors, we’re confident that at least the immediate vicinity of the temple is now risk-free.

Anyway, in this case, a shame because, though not in great shape and definitely not as impressive as Prasart Chrei down the road, it was a highly unusual temple and one which would have been fascinating to investigate further. Prasart Kong Phluk is set on a low rise dropping off to the east and appeared to be actually 2 adjacent, but distinct, temples connected by a short cruciform causeway of some 20 or so m. The southern of the 2 consisted of a laterite enclosure wall with 4 gopuras surrounding an odd laterite pyramid.

The entrance gopuras to Prasart Kong Phluk were in sandstone and contained some carvings whilst the pyramid was of a very crude construction and even the steps were made of laterite although the bottom ones were covered in earth. Curiously the pyramid was actually hollow with a large opening on the east side but the central pit, for want of a better word, contained no visible rubble – so where was the pyramid’s roof or platform?

Furthermore, since the top level of the pyramid was even on all sides there can be no question it was originally higher. The east side also contained no rubble so it isn’t a solid construction hollowed out by treasure seekers but was built as a hollow 3 sided truncated pyramid. The only answer we can see was that there must have originally been a wooden platform on top? The pyramid opens east but the main entrance of the enclosure – leading onto the causeway is north so the pyramid was either built before the rest of the mini-complex or added later on top of an existing structure. The cruciform causeway is classic Suryavarman II style, as seen at Angkor Wat or Beng Melea and may well have been raised above the ground level though it is now filled with earth. (Such raised cruciform shaped entrances were popular with subsequent kings including Jayavarman VII and can be seen in even later temples such as Preah Pithu.)

The north end of the entranceway has a small ruined structure which may have been a southern gopura for the raised step platform behind it. From our vantage point – once we’d decided to not investigate any further – we could make out a low stepped platform – perhaps 3 levels, again dropping off to the east side. According to the map, there ought to be small central shrine on top but whatever remains of that was hard to make out. The platform was relatively wide so again, although without seeing the central shrine it’s impossible to suggest dates, it’s an odd design.

Unlike Prasart Chrei there didn’t seem to be any obvious link to or alignment with, the baray so it is possible that some of the structures pre-date Beng Melea and indeed the only other arrangement of 2 temples joined by a causeway, 1 of which contains a pyramid, that we know of is Prasart Tom and Prasart Krahom at Koh Ker.  Since from at least the early 10th century a road would have connected Koh Ker to what is now the national #6 – presumably following the modern route from Koh Ker to Beng Melea to Dom Dek – the area in question, at the foot of Phnom Kulen and close to the main stone quarries, would have already been an important site.

As we said the causeway looks like classic Suryavarman II period and what one can see of the remaining carvings fit Beng Melea style but the rest – a laterite platform and pyramid are impossible to date. Though the landing stage where Beng Melea’s eastern causeway meets the baray is also a rough laterite structure using similar-sized blocks the aforementioned, apparent east alignment of said pyramid and north entrance of enclosure seems to place the odd laterite at an earlier date.  Any further info on this curious temple site would be most welcome – cheers! 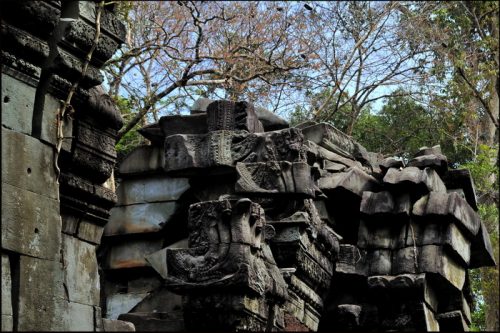 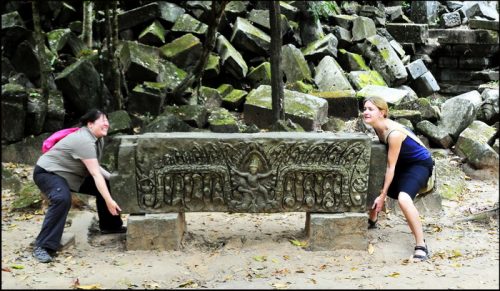 Selection of pix from our recent 'Cambodia Overland' tour