A short series of some our all-time, personal favourite tour destinations. Certain will be well-known and already popular and others much more off the beaten track and rarely visited, First up; Cambodia’s delightful coastal town of Kep.

The above photo of Kep’s delightful Crab Market was admittedly taken a few years ago and some upgrading of the waterfront cafes has taken place but while formerly laid-back Sihanoukville hurtles headlong into high-rise hotels, golf courses and casinos in an attempt to become some kind of Khmer Macao and formerly tranquil Kampot becomes the country’s ex-pat and backpacker hub little Kep, thankfully, just doesn’t ever seem to change that much.

The town beach does get crowded with local families though, (unusually for Cambodia), it’s all very clean and tidy while the nearby island of Koh Tonsai (Rabbit Island), can’t really compete with Sihanoukville’s Koh Rong Archipelago for white-sand beaches and turquoise waters it does, for now, have the advantage of being free of the former’s rapid development and crowds.

In former times, when known as Kep-Sur-Mer, the small town was Cambodia’s prime beach resort for French colonists before becoming the setting for the fancy villas of the post-independence elite. All this, of course, was destroyed during the war years as these bourgeois symbols were a  target for the Khmer Rouge and so these days Kep presents a somewhat surreal mixture of bustling cafes, promenade hawkers and laughing Khmer kids splashing in the sea with their newly purchased inflatable rings with a haunting backdrop of gutted and ruined luxury villas.

Hibiscus and bougainvillaea still struggle against the vines and creepers in the overgrown gardens and macaques now play where French ex-pats once took their evening aperitifs. Promenade parking slots see Peugeots and Citroens replaced with fried chicken vendors or touting tuk-tuks and the shell of the old demolished casino now forms the wall of the local market.

In this very atmospheric setting our favourite activity – after perhaps a morning on Koh Tonsai or a visit to one of the nearby Kampot pepper farms – is a late afternoon stroll along the Kep waterfront for sundowners at one of the Crab Market cafes. Sitting on the stilt verandas above the sea with a cool beer or cocktail watching the sunset over the ocean as the fishing boats return one by one is truly a magic moment.

Once the sun’s set, the boats are all back in port and your thirst’s been quenched then the only thing left to do is try a dish of the famous local speciality; Kep crab in Kampot pepper sauce!

Pretty much a perfect day really and certainly one of our all-time favourites on any tour. Kep is offered as part of a Kep and Kampot extension to our regular tours while a 3 day and 3-night visit features on our off the beaten track Cambodia tour, Beyond Angkor.  Next confirmed departure 18th November; see you in Kep then! 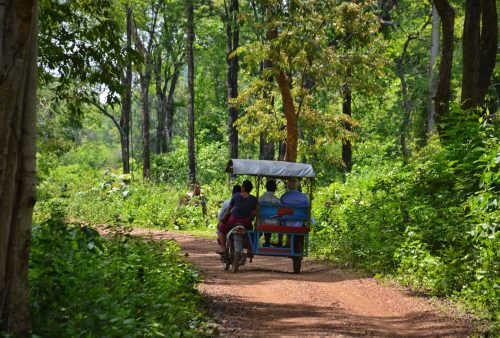