Ok in Cambodia but not in Orpington!

An English headmaster created something of a controversy recently when he ate fried tarantulas during a school assembly in Orpington, southeast London! See article… (They never did that sort of thing in my day.)

The tarantula was already dead, (obviously) having actually been imported from Cambodia where it’s considered something of a delicacy, and was crunched in order to raise cash for a new school sports centre. It did provoke mixed reactions though with some applauding Mr Onac’s innovative fund-raising methods but with one parent complaining…“I know that these spiders are farmed in Cambodia and considered a delicacy there, but we’re not in Cambodia, we’re in Orpington and in Orpington, we don’t do things like this.”

A stop in the town of Skuon – the tarantula centre of Cambodia – has always been a surprising tour highlight for All Points East customers but no-one’s ever raised more than the price of a beer by eating one. (“I’ll bet you a beer you won’t eat that… etc etc….)

Anyway above is a pic of Rick enjoying his mid-morning snack on a recent Cambodia Overland tour. They’re 4 for $1 in Skuon – wonder how much they go for in Orpington?

Fried tarantulas (well. large hairy spiders that are in the tarantula family to be precise) are a genuinely popular snack among locals – not only a tourist gimmick – that we assume became popular during the civil war and Khmer Rouge years when food was scarce. Like the French consuming horse meat during the First World War, they ended up getting a taste for them.

At last count, we had no less than 5 different tours incorporating a coffee and spider break in Skuon so if you really fancy one check here but don’t try it in Orpington because that sort of thing’s just not done there! 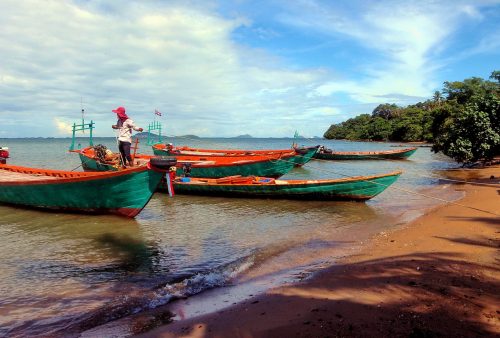