Across the Tonle Sap Lake and up the Sangkar River

What follows is a brief account and selection of photos of our Cambodia boat trip from Siem Reap to Battambang. I think we first ran this Cambodia boat trip way back in 2000. It was a very different country in those days and the journey across the Tonle Sap and up the Sangkar River to Battambang was an adventurous one. While it remains so today, as with much of the fast-developing country, things aren’t quite as wild as they were – even as recently as 20 years ago. Few travellers – either independently or in organized groups – attempted the trip, Boats were hard to find and it was one of the remotest parts of the country a casual visitor could feasibly access. An erratic public service did function – whenever enough passengers turned up – or one of a small but eclectic selection of mostly rundown craft could be hired privately if enough cash was handed over.

While some serious environmental and socio-economic issues – outlined in a previous post – are on the increase, on the surface little has changed and then and now, the landscapes are spectacular and the unique floating villages and river life, fascinating and photogenic.

In those days, boats departed from the foot of Phnom Krom, just south of Siem Reap Town, before winding their way through the flooded forest to wherever water levels deemed the lake began and cutting across the far corner of the vast Tonle Sap towards the mouth of the Sangkar River. A broad estuary of marshes, channels and the ubiquitous, invasive, beds of drifting water hyacinths separates the lake proper from the large floating village of Prek Toal, after which the river begins to find form. To the north, wetlands stretch as far as the horizon while to the south the river skirts the Prek Toal Bird Sanctuary. On the right is Siem Reap province, the left ‘bank’ is Battambang.

Prek Toal village now houses the Saray Community Tourism and hyacinth weaving project where a workshop and small visitors centre make for a worthwhile halt as does one of the unusual, floating Vietnamese coffee and noodle craft that ply the village.

Further upstream another large village, Bak Preah, marks the approximate halfway point and an opportunity for lunch and a drink in a floating grocery store. Patches of seasonal dry land begin to appear and the village is a mixture of raft and stilt constructions. In monsoon periods water still covers the area while in dry months the village can be accessed by a rough track. The Mongkol Borei River branches off to the northwest while the now much reduced Sangkar embarks on a series of tight and torturous meanders to the southwest. At this point some interesting route options become available. An ancient canal cuts through the swamp-like vegetation heading due west and avoiding the seemingly endless meanders of the main channel. The canal itself is shallow, narrow, overgrown with vegetation and so clearly ancient that we’ve always assumed it originally dates from the Angkor period. (We’ve never managed to find any information on it whatsoever although some locals date it to the more recent Khmer Rouge era.)

The shy and endangered Indochinese silver langur is often seen along this stretch and, where mud banks begin to emerge, bee-eaters, malkohas and kingfishers crisscross the river and several species of weaver birds construct their elaborate nests in overhanging branches.

When water levels are sufficiently high we’ll batten down the hatches – the boat is more or less the same width as the cutting – and squeeze down this convenient short cut. In the dry season, the canal actually morphs into a dirt track so we organize pick-up trucks to meet us at Bak Preah for the second leg of the journey – an hour or so’s rather bumpy ride into Battambang Town and an adventure in itself. There are unfortunately windows either side when there’s neither enough water in the canal for boats, yet still too much for a vehicle and when there’s no choice but to continue along the Sangkar by way of 3 point turns and judicious use of wooden poles. (And yes there was a famous occasion which saw all our passengers up to their knees in the shallow river!)  On the bright side, bird-life is sill prolific and trucks await us upstream wherever sufficient dry land permits.

A final option involves forsaking the Sangkar and from Bak Preah heading up the slightly larger Mongkol Borei River which winds northwest and also leads to a basic disembarkation point where we can arrange a rendezvous with road transport. This near-pristine section is tightly controlled by the authorities with restrictions on fishing, habitation and transport in place so wildlife is abundant and the banks litter-free but permission for travel isn’t easy to come by either.

Firmer, higher banks, riverside fields of watermelon and pulses, permanent dwellings and the occasional scooter or herd of cattle signal our approach to Battambang Town. As the number of houses increases the river fills with small fishing boats, nets and fish traps while pontoon boats ferry passengers and bikes from bank to bank.  Riverside wats indicate road access and convenient rendezvous points with our tuk-tuks waiting to whisk us into town.

Arriving in sleepy Battambang 20 years back one had the choice of a bunch of run-down UNTAC hotels for sleeping and the good old White Rose for eating. These days there’s a wide choice in both departments and while the long-standing Sino-Khmer eatery is still to our minds the all-round best local food option in town, the tiny Delux (sic) Villa with pool and garden setting is a cosy and comfortable accommodation choice.

Our craft are traditional-style varnished wood boats, with a mixture of benches, cushions, chairs and (usually) a hammock or two for passengers while the larger versions allow rooftop seating. Travel time varies according to water levels, stops – including untangling hyacinth stems from the prop – and of course, the route taken on the 2nd section.  Our record time for this Cambodia boat trip is around 7 hours door to door, while mechanical issues, mud banks and having to inch our way like a green-icebreaker through clogging mats of hyacinths, can occasionally extend the trip by another hour or 2.

Still, there’s an ice-box on board so you can sup a cold soda or even uncork a bottle of chilled Sauvignon, picnic lunch and plentiful snacks. Make your own bird list (there’s generally some binoculars around), photograph the varied and wonderful landscapes and take in the non-stop scenes of the unique river life on what, to our minds, is the most fascinating, picturesque, photogenic and unusual boat journey you can take anywhere in Southeast Asia. 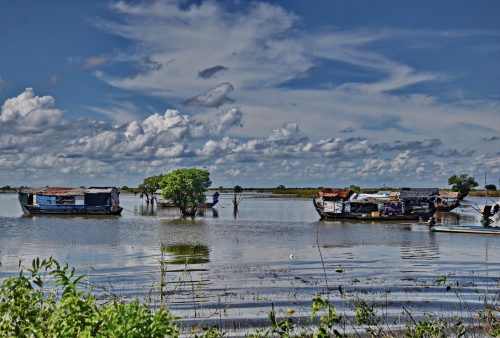 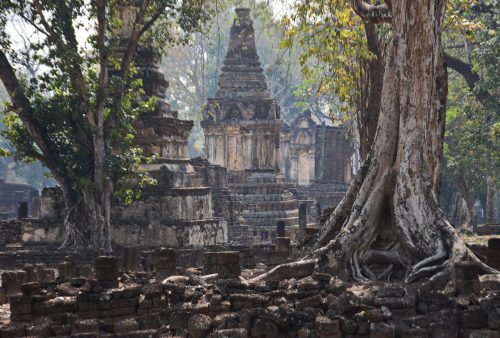