A few photos of some of the spectacular bird-life on the Sangkar River we’ve come across on recent boat trips down from Siem Reap to Battambang. (Would have a lot more for you but since it’s tricky getting sharp shots of fast-moving birds from a heavily vibrating boat we had to delete most of them!?) The Sangkar River begins in the mountains to the south of Battambang and flows through the provincial capital of the same name, through stretches of Battambang and Siem Reap Provinces before emerging into the southwest corner of the vast Tonle Sap Lake. Much of the latter part of the river’s course is through seasonally flooded, relatively pristine, marshland and ‘flooded forest.

The area of flooded forest to the east of the river’s mouth, as it joins, the lake forms Prek Toal Bird Sanctuary – home to no less than 7 globally threatened species with; the world’s largest colonies of Oriental Darters, Spot-billed Pelicans and Greater Adjutants and Southeast Asia’s largest colonies of Black-hooded Ibis, Lesser Adjutants, Painted Storks and only colony of Milky Storks.

Spectacular Pied Kingfishers, Blue-tailed Bee-eaters and the long-tailed Malkohas are also common sightings and indeed most of the above-listed species can be easily spotted sitting in the comfort of our own boat so…..wellies and anoraks not required!

The winter months when many water-birds migrate from Manchuria and Siberia are best but there’s plenty of avian activity all year round. Following this bird-life on the Sangkar River we’ll look at some of the fascinating human activity and landscapes along the river in our next posts while, just for a giggle, we’ll draw your attention to our Stuck on the Sangkar tale too!

The amazing boat journey from Siem Reap to Battambang is featured in the following tours: Indochina Adventure, Ruined Cities and Tropical islands, Cambodia Overland and our photography special, Images of Cambodia. 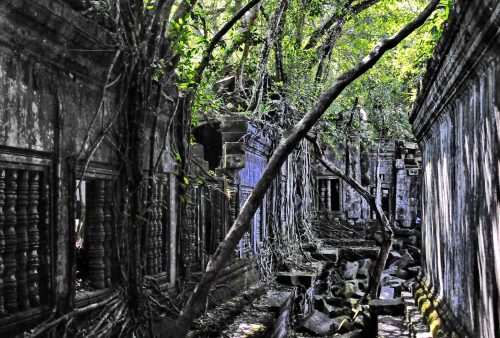 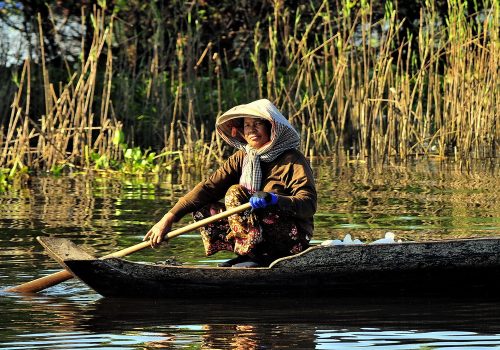 Local life on the Sangkar River