Prior to the construction of Angkor Wat Baphuon  – the 11th-century royal temple of King Udayadityavarman II (trying saying that after a couple of Angkor beers) – was the largest temple of the Angkor empire. With a main tower surmounting the massive sandstone pyramid  – said to have originally been clad in bronze – and it’s spectacular, raised, entrance causeway Baphuon must have been a truly impressive sight.

Unfortunately for many years, the partially collapsed edifice has actually been one of the sadder sights of the Angkor temple complex until its restoration and re-opening was completed in April 2011 allowing visitors to finally see the temple in, if not exactly its original glory, some recognizable semblance of its former spectacular self.

It was probably just too massive a construction in the first place with the sandy soil unable to bear the sheer weight of millions of tons of sandstone and laterite. A misguided makeover in the 16th-century involving a huge reclining Buddha image carved out of the west side, proved to be the final straw. When French archaeologists began turning their attention to the crumbling pile in the late 1950s it was already beyond repair and in 1960 a decision was made to completely dismantle a major part of the temple, consolidate the foundations and then reconstruct the entire 50-metre tall structure. Some 300,000 sandstone blocks were then removed, carefully numbered according to position and laid out on the ground around the temple’s base.

Clearly a painstaking and slow task and with the increasing intensity of the fighting with the Khmer Rouge and their subsequent accession to power in 1975, work was interrupted. Worse than this the actual plans – the key to the 3rd of a million stone blocks’ location – was lost, (or some sources say destroyed by the Khmer Rouge!) In 1995 when renewed peace allowed archaeologists onto the site once again they were faced with a partially dismantled and partially collapsed mega-structure, a sea of lettered and numbered stones stretching off in every direction and….no plan for what had become the world’s largest jigsaw puzzle!

Computer simulations were attempted and even some of the original stonemasons from the 1960s dismantling were recruited to help out and finally after 16 years of work on the puzzle the temple of Baphuon was officially re-opened in April 2011. Yes, several thousand unfitted pieces still litter the surrounding area including numerous carved sections and it’s unlikely that all the pieces will ever be replaced but visitors are today permitted to visit the entirety of the construction.

A visit to Baphuon temple is included in the afternoon of day 2 of our Angkor itinerary during our walking tour of Angkor Tom. Further details of our small group Cambodia Overland tour can be found by clicking the preceding link whilst our full range of Cambodia tours can be found here. 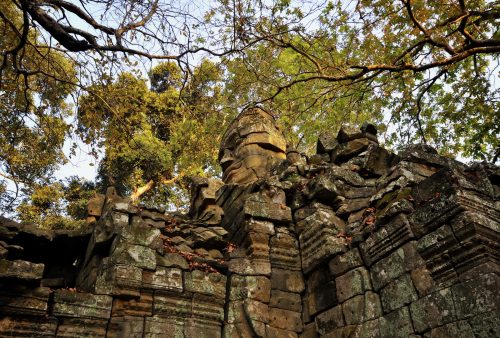 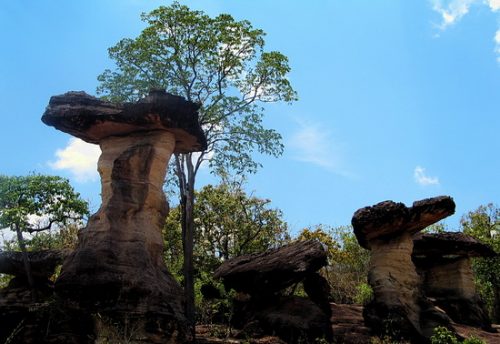