Came across this nameless Angkor period ruined temple whilst poking around in some villages outside of Siem Reap recently: even the locals didn’t have a name for it and though these days the few remaining stones scattered across the grounds of a contemporary Buddhist watnf don’t really merit the term ‘temple’ it’s interesting to think that even these meagre remains once constituted what would certainly have been an impressive edifice. There are literally thousands of these sites across the country – most villages can lay claim to at least one ancient ruin – the vast majority of which are rarely or never visited. This one was in the village of Trapaeng Svay, near Siem Reap’s Svay Leu District and although as we said even the villagers didn’t have a name for it the ruin was situated in the grounds of Wat Trang.

As with many such sites, a new building has been erected on tip of the old so it’s impossible to see from the pieces of sandstone laid aside what may have been there before. Afraid we don’t have any spectacular photos of creeper covered towers and moss coated carvings, we’re not about to add the ruin to any of our Cambodia tour itineraries and you would need a lot of imagination to appreciate the site, but…..well we enjoyed it!

The original temple sited on a raised, still visible platform must have been in brick or laterite and there are just a few sandstone blocks remaining; we guess from the main entrance structure to the east of the platform.

The most interesting item was an ancient sandstone funerary urn which looked like it may even have been contemporary with the old temple. In good condition and carved out of a solid block of sandstone, our guide claimed straight away that it ought to be in a museum.

From the entrance gopura, a causeway still leads past two adjacent ornamental ponds to a large baray or reservoir opposite. This was some 500 m on each side and amazingly still full of water and represents a substantial amount of time and effort on the part of the builders.

The original temple then consisted of a central brick tower on a laterite platform with sandstone gopura, entrance causeway flanked by ponds leading to a large baray and must have been an impressive site. There aren’t enough remains to date the site though being on the old route between Angkor and Koh Ker it may possibly date to the 10th century. The carvings, which must once have been there are now long looted or perhaps lying buried in the surrounding earth.

An interesting aside to the ruins were the numerous wood and tin ‘graves’ in the temple grounds. Resembling post boxes they contain the ashes of deceased villagers.

Ignored, forgotten even by locals, unspectacular but fascinating all the same! Svay Leu village is included in our Beyond Angkor tour. 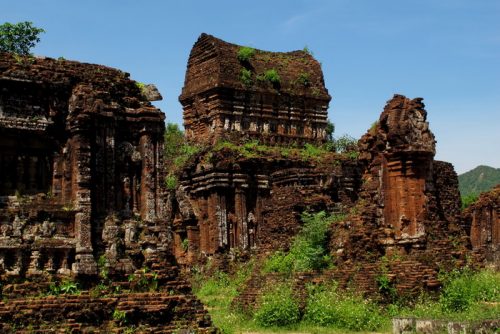 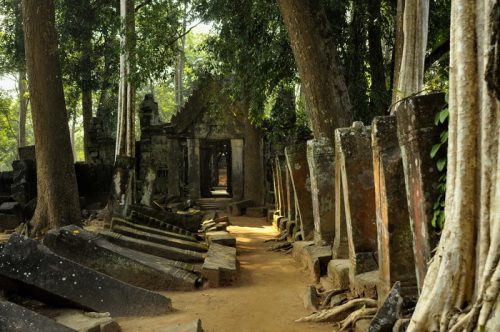