Well, both is the easy answer! There’s no denying Ak Yum Temple is a very unspectacular ruin and whichever way you look at it it doesn’t really amount to much more than a pile of old bricks with a couple of sandstone slabs scattered around for good measure. It’ll be a snowy day in Siem Reap before this remote little temple will rival Angkor Wat or Ta Prom – “Ak Yum postcards – only 1 dollar” – but it is certainly one of the most historically important sites in the whole area.

The current pile of rubble, situated on the edge of the Western Baray, just past Siem Reap Airport, dates a whole 500 years before Bayon and there is evidence that the first temple on this site was built as far back as the early 7th-century, some 250 years before the first supposed pyramid temple of Bakong at Rolous was initiated. Ak Yum was probably originally a  5-level pyramid construction with a brick tower or shrine on the top and pre-dates the Jayavarman II pyramid temple of Rong Chen on Phnom Kulen by nearly 200 years as well. (A re-used sandstone block in the 8th-century construction has an inscription dating to the year 609.)

So, if the first temple on the Ak Yum site dates to early 7th-century it makes it, not only one of the oldest Khmer temples in the Siem Reap area but indeed in the entire country! This was the change-over period between the Funan and Chenla civilisations and only a handful of sites can confidently be dated to this period. Certain in the northern group at Sambor Prei Kok, Prasart Phnom Hanchei, (Kompong Cham), and Ashram Maha Rosei (Phnom Da) all usually attributed to King Bhavarvarman (560 to c. 590).  609 would be the reign of Mahendravarman – brother of Bhavarvarman – and it’s plausible to think he set up a temple at Ak Yum as an alternative to his brother’s capital of Bhavapura, generally thought to be in the Sambor Prei Kok region.

Anyway, with the subsequent king, Ishnavarman upgrading Sambor Prei Kok to impressive levels the Siem Reap area seems to have been put on the back-burner until Jayarvarman I came along at the end of the 7th-century and constructed an entirely new capital city named Purandarapura near what is now the Western Baray of Siem Reap. A renovated Ak Yum was probably his state temple as well as that of his daughter, Queen Jayadevi, (though she may have renamed the city Aninditapura?). An inscription dating to 713, during her reign, was found here.

This temple, along with neighbouring sites such as Prei Khmeng, formed a large complex known as Banteay Choeu, which appear to have been inhabited until the 11th-century when the construction of the massive Western Baray flooded much of the area.

One of the most interesting Angkor temples from an archaeological perspective then but you’ll need a fair amount of imagination to appreciate a visit!

The superb early site of Sambor Prei Kok though, with its dozens of towers spread through the forest is included in our ‘Beyond Angkor‘ itinerary. 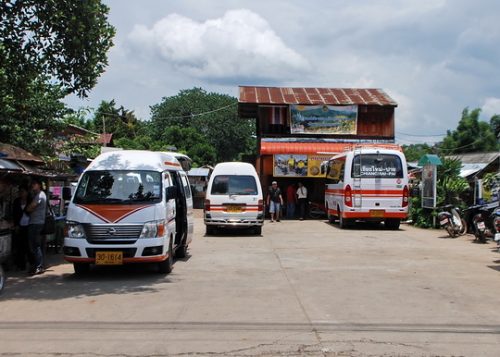