10 Cambodia dishes to try on a tour to Phnom Penh, Kampot, Kep or Siem Reap including the well-known Amok or Kep crab aswell as some lesser-known ones

As we maintained in our recent – ‘Cambodia tours – what’s the food like post’ – after having taken a backseat to its more culinarily illustrious neighbours Vietnam and Thailand – Khmer cuisine is making great strides of late so, without further ado, here’s a selection of 10 Cambodia dishes to try among the kingdom’s varied and surprisingly tasty food offerings.

1. Fish Amok. If there’s a national signature dish then this is probably it. Amok, a mild, coconut milk-based curry, appears on every single Khmer restaurant menu and consequently comes in a wide variety of forms but the classic version – with fish and steamed in banana leaves – is delicately flavoured, rich, creamy and a guaranteed winner!

2. Kep crab fried with Kampot pepper. This dish alone makes a trip to Kep worthwhile; crabs plucked straight out of the sea fried with whole green fresh peppercorns from neighbouring Kampot’s plantations and who cares if a crab is messy to eat!? Just licking the sumptuous sauce of the shell is heaven. Kep’s picturesque wooden restaurants built on stilts right over the South China Sea certainly add to the experience but a word of warning – trying this in Phnom Penh or Siem Reap might be a bit risky – (too far from the sea)!

3. Nom pang. Khmer sandwiches. Khmer and the similar Vietnamese sandwiches have become something of a fad of late and justifiably so. The art of making light and fluffy baguettes was possibly one of France’s greatest gifts to Indochina and these simple but tasty local style sandwiches are almost addictive. Fillings vary but generally involve a locally made pate, sliced cold meats such as ham, gherkins, spring onions, chillies – just point to what you want in it. About $1!

4. Prahok. The famous, or even infamous, fermented fish paste comes in a wide form of shapes and sizes and yes, it can be pretty overpowering but the version above mixed with minced pork, chillies and coconut and served as a dip for fresh vegetables is mild creamy and delicious. Locals often call it ‘Cambodian cheese’ due to its pungent flavour and assume that no foreigner could possibly like it. Well, they’re wrong – well prepared it’s mild and delicious and everyone we’ve tested it on during our Cambodia trips has enjoyed it so time to stick prahok on the tourist menus too!

5. Fresh noodle soup. Noodle shops where the fresh dough is spun into noodles or folded into ravioli and fried or dunked in broth seem to be popping up all the time in Phnom Penh and wonderful they are too. Part of the fun is watching the cook spin his magic but the fresh noodles in a light broth with some kale and say crispy pork makes for a great light lunch and is as good a bowl of noodle soup as you’d find anywhere.

6. Kor Ko, nom pang – beef stew with baguette. Curry with baguette on menus is not a nod to the tourist taste but is a popular local dish. This beef version is more stew than curry – tender chunks of beef in a surprisingly rich and complex sauce. Locals like the fatty and tripey bits too but if you ask nicely they’ll serve you lean bits only. Popular breakfast or brunch dish with Khmers – the cook will have been up since the early hours simmering the pots and the results a wonder.

7. Banana flower salad. A lot of people don’t even realise that banana trees have flowers let alone that they’re edible. The interior petals of the flower are grated or diced and mixed with lime, peanuts, tomatoes, chillies, dried shrimp, mint, shallots and often chunks of chicken to create a complex salad with a fantastic flavour combination. Original and not to be missed!

8. Ben Xao – Saigon pancakes. Yes as the name suggests these are of Vietnamese origin but are found throughout Phnom Penh and indeed I have Khmer friends who insist they originated in Cambodia. They didn’t but some of the pancakes I’ve found in the Khmer capital rival anything I’ve come across in Saigon itself. Wafer-thin crepes made from rice flour and turmeric are stuffed bean sprouts, eggs, prawns and often minced pork then served with piles of fresh salad and herbs. Every mouthful’s different! Magnolia in Phnom Penh’s 51 Street is our choice.

9. Fresh fruit. Seems an odd choice and a large proportion of the fruit found in Cambodian markets is actually imported from either Vietnam of Thailand but along with the local crops this does provide a huge choice and since Khmers are not yet as addicted to processed mini-mart junk as certain of their neighbours may be, fresh fruit is still a very popular snack for locals. Great way to start a day or end a meal.

10. European food. Sounds like an odd choice but the wealth of foreign restaurants in Siem Reap and Phnom Penh means you can get a top-notch Italian or French meal in Cambodia for a fraction of the price you’d find in Europe, America or Australia for instance. No matter how good the local food is it’s nice to have a change from time to time. 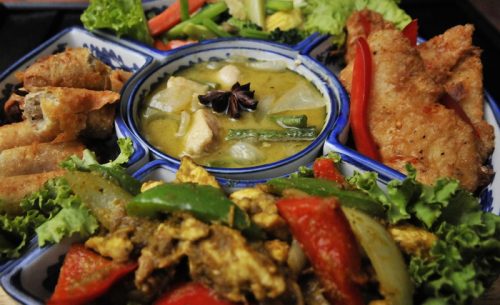 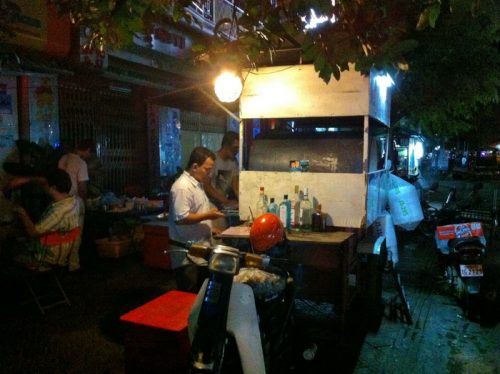 Cambodia - a pizzeria on the back of a tuk-tuk!