Despite being blessed with plentiful natural and historic wonders Myanmar/Burma currently has the grand total of zero sites on the UNESCO World Heritage list. Not sure who’s to blame since if we understand correctly these things work both ways – a government has to apply for that status for a site which is then examined and accepted or refused by UNESCO? Also understand that the Myanmar govt has made a provisional list; Bagan, Mandalay old cities etc and whilst said govt may not be flavour of the month for obvious reasons looking through the list we see for example 6 sites in Syria, Gadaffi’s govt. had 5 sites accepted and even North Korea has the Koguryo Tombs so….?

Well, we reckon the incredible Pindaya cave temple, Shwe Umin, would be a good candidate! We admit to being slightly sceptical when a day trip to yet another cave temple loomed on our suggested recce itinerary.

The spectacular Pak Ou Caves near Luang Prabang, the 5th/6th-century cave monuments near Cambodia’s Kampot, (see earlier post) and the World Heritage cave temples at Dambulla in Sri Lanka sprung to mind not to mention a host of less spectacular cave temple sites.

However, I don’t think we’ve ever been quite so awe-struck upon entering a cave temple as we were at Pindaya! (We just stood in the entrance going ‘wow’ for the first 5 minutes!)

Now photos can’t do it justice – it’s not a single view but the entirety of the site that is so impressive: thousands of Buddha images – small, medium, large  – on the ground, high up on ledges, wrapped around stalactites and all painted or gilded with gold was a truly spectacular sight. Not an extensive cave system like Thailand’s Chiang Dao sacred caves but a series of chambers, tunnels, stairs and passages with closely packed statues in the larger caves creating their own tunnels and passages  – some you have to squeeze through – between the host of golden Buddhas. Maybe the fact it’s still a work in progress would be problematic for UNESCO – it originally dates from the 17th/18th centuries but statues are still being added right now.

The caves are located halfway up a limestone cliff that towers over the town of Pindaya and so views are spectacular though they have installed a lift which is handy for lazy what-names like ourselves!

There are several separate caves in the hill but since we’d stopped so many times on the way we only really had time to take in the main one. Although as we mentioned the picturesque drive through the farmlands of the Shan Plateau alone was worth it the caves were certainly one of the most stunning sites on our Burma recce and looking forward to getting back there soon to check out the other caves!

Oh and by the way umbrella making is a local cottage industry so we stopped at a local house at the foot of the hill too! 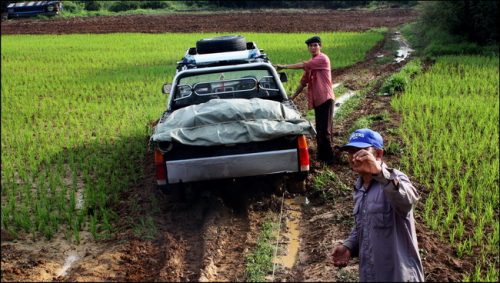