The tiny, but well preserved Prasart Phnom Ngok or Chnork in Kampot Province is probably the best candidate for Cambodia’s oldest temple (or at least reasonably intact oldest temple. It clocks in at some 1,600 – 1,700 years (estimates do vary). That’s nearly twice as old as Angkor Wat!

With the expansion of the Chenla kingdom, from its heart in southern Lao into what is now Cambodia, during the late 6th-century, simple brick shrines began to proliferate in the lowlands of the Mekong, Stung Sen and Tonle Sap Valleys and around the great lake. The brothers Bhavarvarman (c 560 to 590) & Mahendravarman (c 600 to 611) founded their great capital of Bhavapura at Sambor Prei Kok and proceeded to consolidate their newly gained territories in the fertile lands of the aforementioned valleys. The expansion, consolidation and building continued during the subsequent reign of the powerful king Ishnavara so by the mid-7th-century brick shrines or towers would have been a common sight from Thala Bolivet, Stung Treng in the north to Phnom Bayang in the far south.

Much of the land acquired by the Khmer kings was at the expense of the Funan polity based down in the Mekong Delta. Funan is thought to date back to the 2nd or 3rd centuries C.E. but little is known of the kingdom and only a few brick basements and foundations of very ruined constructions have been discovered at various sites in the lower Mekong and Delta regions at for instance the capital Angkor Borei and the main port of Oc Eo. Well except that is, the brick shrine of Prasart Ngok – hidden away and sheltered from time, roots and weather in a cave in Kampot Province. Its relatively crude carvings and archaic style clearly pre-date Sambor Prei Kok and archaeologists give it an approximate 4th or 5th-century date placing it well before Chenla and firmly in the Funan period.

The temple itself is a small brick tower constructed around a natural linga formed by a stalagmite. Minimal repair work has been done on the walls and overall it’s in good condition. The cave is situated in one of the numerous limestone outcrops that rise spectacularly out of the paddy-fields around the town of Kompong Trach. Many of the area’s other caves contain more recent shrines and Buddha images and it makes for an interesting trip from Kampot or Kep towns.

Kompong Trach was visited on an All Points East, Beyond Angkor tour which includes southern Cambodia’s Kep, Kampot and Takeo Provinces. 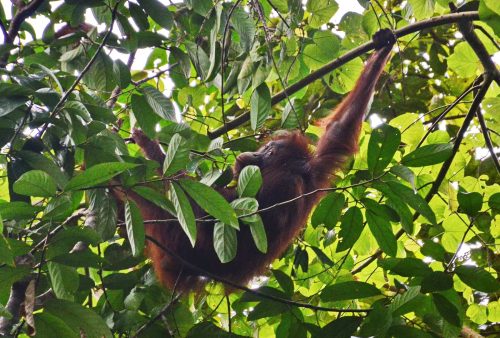 Building Bridges Between Conservation and Tourism in Borneo 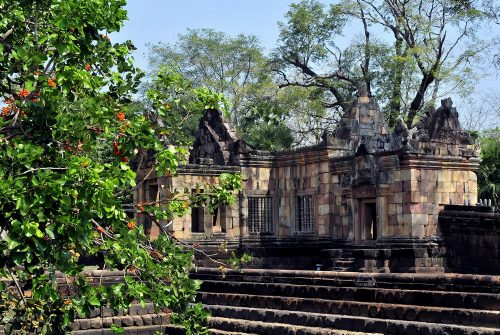