How millennia-old animist beliefs are still widespread in Southeast Asia

As even a brief visit to the region will have revealed, small wooden, or increasingly these days cement, spirit shrines are ubiquitous in houses, gardens, cafes, and even bars, banks and offices throughout the Buddhist nations of Southeast Asia.

Every building, home and commerce should have one. They’ll feature eclectic collections of statuettes and figurines – many may well even house images of Buddha – but these are shrines for offerings to the local, resident spirit, or spirits. Buddha doesn’t reside in the tree at the bottom of the garden, nor in the mantlepiece above the expresso machine – whatever worshippers may think – and these practices actually hark back thousands of years to pre-Buddhist times.

Both Buddhism and Hinduism arrived in Southeast Asia some 2,500 years ago – brought by traders, sailors and accompanying Brahmin priests, arriving from the early kingdoms of the Indian subcontinent. Prior to that – during the late bronze, early iron ages – the Mon-Khmer inhabitants of mainland Southeast Asia, early farmers and before that hunter-gatherers, would undoubtedly have practiced a combination of animist beliefs and ancestor worship. (The latter still has great importance today in Vietnam particularly.)

Even in the 21st-century, some groups still inhabiting the further-flung jungle or mountainous regions of Southeast Asia maintain these beliefs, despite the best efforts of Christian missionaries. (e.g. Karen along the Thai-Burmese border, ‘Orang Asli’ groups in peninsula Malaysia and southern Thailand, the Wa in Burma, and some of the ‘Montagnard’ peoples of the Vietnamese Central Highlands, northeastern Cambodia and southeastern Laos. That’s not including the many Sino-Tibetan groups of northern Thailand and Laos who are relatively recent arrivals in the area.)

Such practices are particularly prevalent in Khmer and Mon areas – peoples who did inhabit the region in pre-Buddhist times – and animism is never far below the surface in Cambodian or Burmese Buddhism. Ethnic Tai groups, including Siamese, Lao and Shan, migrated south into the river valleys from their remote mountains less than a millennium ago. These new arrivals were perhaps more enthusiastic about adopting the new trends and thinking of the lowlands but again ancient beliefs accompanied them and while today they may like to consider themselves more modern and sophisticated than their Lao, Khmer, Burmese neighbours, animist elements are still ubiquitous in Thai Buddhism.

The common-or-garden house shrines are perhaps in some ways an intermediary stage between animism and Buddhism – especially in the minds of the worshippers – and indeed many Theravada Buddhist wats are really only highly elaborate versions. Of course, a large Buddha image dominates the main worshipping hall but look around and you’ll invariably a collection of, often weird and wonderful, secondary shrines.

Above are a kind of Buddhist cherub known as kuman thong in Thai which represent the spirits of babies or children who died during childbirth. Red pop and toy cars are obviously popular offerings at this shrine.

Many of these are impromptu, improvised shrines – lacking the ‘official’ spirit houses available at all good garden centres and carpenters’ workshops – with the above being statues in a temple garden fountain while below, Ganesh plus parrot, decorate a wat’s fishpond.

Some of these temple shrines can be decidedly on the odd side (if offering cherry Fanta to the spirits of still-born babies wasn’t strange enough) while, once outside the wat precincts, shrines to trees, rocks, streams, (we even once saw a sacred termite mound) go full-blown animist. However, aware of people’s attention span, we’ll save that for part 2.

Keep an eye open for our latest travel blog posts, either on our All Points East website or our corresponding Facebook feed. 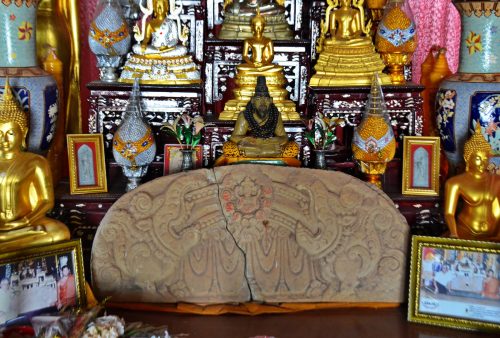 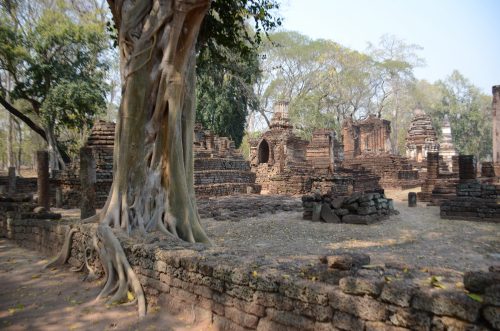