Turn up in just about any Cambodian village and ask the locals if they have a ‘prasart boran‘ in those parts and they’ll almost certainly direct you down some track, across a field or round the back of the village wat to their very own Angkor period ruined temple. Now don’t get your hopes up since many of these will consist of little more than a forlorn pile of bricks – check out the un-named, probably early 9th-century ruin below we found in the car park on Phnom Kulen – but every now and then you will come across a hidden gem. Prasart Chrei might not fall into the gem category but an interesting and very rarely visited site nonetheless.

The little-known Banteay Srei, Dom Dek for example; – small, in a very ruinous state, but high on atmosphere – has proved a more popular stop on the road to Siem Reap than the larger, more impressive, but somewhat ‘manicured’ Kuhananokor. In fact, we did have one visitor who claimed to prefer it to Angkor Wat which might have been something of an exaggeration but there is an excitement at finding one of these forgotten, out of the way sites that you know practically no-one else ever visits.

On a recent visit to the awesome Beng Melea, and having heard rumours of some minor temples close to the temple’s baray, or reservoir, we took a side trip down the dirt track leading east from Beng Melea, (the old Angkor period road that leads to Preah Khan, Kompong Svay), to see what we could discover. A local policeman had indicated a temple at around 1 km, (Prasart Chrei), and another at 2km, (Prasart Kong Phluk), and informed us that the track was in good condition. (Thanks very much to Reinhart at Angkor Guide for confirming the temple names for us.)

Sure enough, after a kilometre or so following the track that skirts the southern side of the baray a temple appeared amongst forest just to the south of the road, but a forlorn pile of bricks it certainly wasn’t! This was a substantial temple with long entrance causeway, massive perimeter gallery clad in large sandstone blocks and even showing some remnants of what must have been impressive carvings.

At first, it seemed the long entrance way on the north side, lined with stone ‘lanterns’, was the main entrance but the temple is aligned in the classic east direction and the northern causeway simply lead to a landing stage, (now presumably covered by the dirt track itself), on the edge of the baray.  Lengthy entrance ways are a feature of Beng Melea – the rarely visited eastern entrance, again lined with stone ‘lanterns’ stretches some 500 m to a large laterite platform located in the centre of the baray’s western side.

According to maps, (again supplied by the helpful Reinhart), another lengthy entrance way leads east to a distant gopura but due to the area still being mined, we didn’t investigate further in that direction. Prasart Chrei had no obvious moat – which may not have been considered necessary due to its placement on the edge of the baray – and consists of a massive outer gallery with 4 gopuras and a central tower connected to the eastern entrance by another covered gallery and a pair of symmetrical ‘libraries’ aligned east-west.  Said libraries are unusual in that they actually have what appear to be 2nd-floor windows which would certainly have aided ventilation if the theory that said ‘libraries’ contained sacred fires is correct.

As with it’s larger neighbour much of Prasart Chrei is totally ruined yet certain sections remain in remarkably good condition. The completely wrecked central tower is presumably a result of destruction by treasure hunters and we couldn’t find any intact lintels or pediments at the site though plenty of segments and partial carvings remain.

The above pediment shows signs of both old and recent damage and whilst it’s difficult to make out we’d be tempted to suggest that the central lotus position figure and a row of figures beneath, may possibly represent Buddha or Bodhisattva? The relatively complete pediment seen below also appears to feature figures in similar positions.

Prasart Chrei would have been a small but nonetheless tall, solid and impressive temple with a spectacular lakeside setting and by its style and location was firmly an intrinsic part of the overall Beng Melea royal complex rather than a mere subsidiary temple tagged on by a local ruler.

Beng Melea itself is generally accredited to the reign of Suryavarman II, (based on style rather than inscriptions), though as with Jayavarman VII his list of constructions is just way too long for plausibility and many temple projects must have been started or finished under earlier or later rulers. Some historians have suggested Jayarvarman VI may have initiated the Beng Melea project and others logically give the later Dharanindravarman II as being the king who completed the temple – logical since the long-named king is known to have been a Buddhist hence added a few Buddhist finishing touches to the huge complex.

Prasart Chrei, therefore, was apparently either constructed by Suryavarman II and finished under the direction of Dharanindravarman II or added as the latter king completed the huge on-going Beng Melea complex.

All in all a fascinating little temple, a great find and worth a quick diversion when visiting Beng Melea. An interesting visit would be a brief stop at Prasart Chrei from where one could walk to the baray landing stage and enter Beng Melea by the long and impressive eastern causeway. Not only would that avoid any crowds but would certainly help to place the popular principal temple in its context as the central feature of a much larger complex.

As we mentioned a 2nd temple was indicated to us a bit further down this track and so more on the unusual twin temple of Prasart Kong Phluk in a later post. Cheers for now! 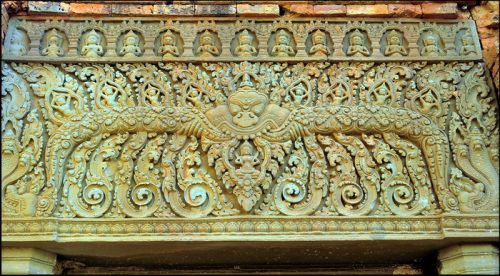 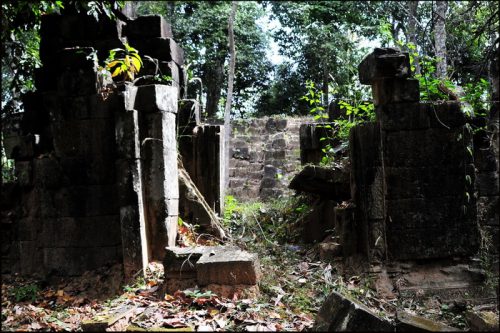