The Perhentians comprise of 2 main islands and a few rocky islets located in the Gulf of Thailand off Malaysia’s North East coast in Terengganu State. The imaginatively named ‘Small Island’ is the backpacker’s choice and due to it being small and popular is the least pristine of the 2, however the ‘Big Island’ is remarkably well preserved. Also very popular, development on both islands has fortunately been limited by the lack of roads, transport and electricity as well as by the Malaysian government declaring the area a national marine park. Good move and so far efforts to protect the islands, whilst far from perfect, do seem to be paying off when you compare it to Thailand’s Koh Tao or Koh Phi Phi for example. Wind turbines have now been installed on the small island with the intention of replacing all the petrol run generators currently in use.

Resorts on Perhentian Besar, (big island), are generally low key, small size and mid-range, so no rabbit warrens of cheapo chalets but no mega resorts with private golf courses either. Most of the island’s rocky East, North and South coasts are completely pristine as is the jungle interior – still home to decent bird-life, dusky langurs and giant monitor lizards. Resorts are concentrated in 3 areas: the sandy West coast, stunning Flora Bay on the south east side and turquoise watered Turtle bay in front of Perhentian Island Resort.

Coral surrounds much of both islands and is mostly in surprisingly good condition and sharks and turtles are also big diving draws. Black-tipped reef sharks and turtles are common encounters whether snorkelling or diving and both can be seen very close to the shore. The black-tips, mostly youngsters but occasionally up to 1.50m, are inquisitive but harmless so don’t get alarmed! The photo below was taken around 20ft from the beach!

The Perhentians are offered as an extension to our Malaysia – Coast to Coast tour, and best season is March to September. The nearest port is Kuala Besut – a 40 minute speedboat ride away and the nearest airport is Khota Baru – a 45 minute drive from the port. For detailed Perhentian info try here! Cheers!

Southeast Asian ice cube debate – to drink or not to drink?? 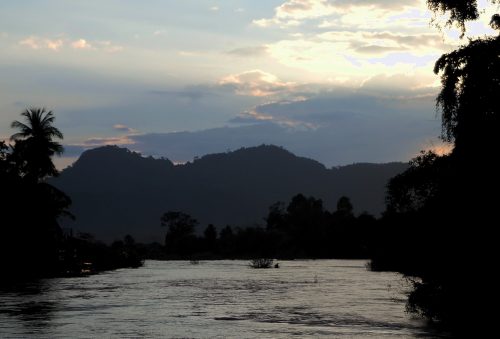