Photos and brief descriptions of some of the Khmer artefacts in the National Museum Bangkok originating from Angkorian and pre-Angkorian period temples in present-day Thailand. Bear in mind, of course, that the museum only displays a fraction of its myriad exhibits at any one time and there are certainly far, far more such artefacts in storage.

Fragment of an early, Thala Borivet-style lintel, reportedly originating in Chanthaburi Province. Probably Thong Thua (Wat Thong Thua Museum, or directly from Noen Paniat itself). This resembles very closely the left side of a broken lintel in the aforementioned museum and we’ve seen them described as 2 sections of the same lintel although in so far as they both feature central medallion figures we don’t think this is possible. (Classic Thala Borivat lintels have a single central medallion and the later Sambupura sub-style, 3 but never 2.)

Well-preserved Sambor Prei Kuk style lintel dating from the early to mid 7th century. We’re uncertain of the provenance of this relief but it may be a relief from Prasat Ban Noi, Sa Kaeo Province, which is recorded as being housed at the National Museum. However, other lintels from this period are almost certainly held in storage.

According to the Fine Arts Department, this lintel from Phanom Wan in Khorat dates to the 9th century and the Preah Ko period although in our opinion it displays distinct Bakheng, (late 9th-early 10th century) features.

Another excellently preserved relief is this mid-10th century, Baphuon-style lintel, originating at Prasat Ku Suan Tang (or Taeng) in the northeastern province of Buriram. The carving depicts Anantashayana Vishnu – or Vishnu reclining on the naga Ananata, with Brahma emerging from his navel. As, in our experience, the Thai Fine Arts Department has a tendency to assign any unverified mid-period relief to the Baphuon category, we’re somewhat sceptical. The Baphuon period (1050-1080) was a relatively short historical timeframe and the temple of provenance’s precise dating is unverified. (See Thailand Tourism’s description.) A slightly later date is plausible.

Another relief from the same period is this lintel featuring Vishnu riding on Garuda which originates from a now disappeared 12th-century temple at Wat Na Prathat in Khorat (Nakhon Ratchasima) Province.

The provenance of this pair of Chenla-period Vishnu statues is recorded as being Wat Tho – a small monastery in the centre of Petchaburi Town. Whether this is the sculptures’ original location or whether they were found elsewhere and deposited at Wat Tho at a later date, is unclear. Furthermore, while clearly demonstrating a Khmer or Khmer-influenced style, if Wat Tho indeed corresponds to the site of a 7th-century temple then evidence would be required to confirm that it was a Chenla rather than a Dvaravati Hindu sanctuary.

This large (3m +) bronze Boddhisattva image was reconstructed from several bronze sections found at Ban Thanot, Nong Sung, Khorat Province and is considered to date from the 8th to 9th centuries. As Buddhist temples from this era are rare in Cambodia this sculpture appears to be indicative of significant Mon/Dvaravati influence in northeastern Thailand.

High relief carving noted as originating from the Phra Kal shrine, Lopburi and dated to the 11th-12th centuries and possibly Suryavarman I period. Although listed as apsaras, the pair of figures are more likely to be devatas or minor female deities.

The above images, featuring multi-armed depictions of the Boddhisattva Avalokiteshvara (Lokesvara) originate from the area of Muang Singh in present-day Kanchanaburi Province and are dated to the Jayavarman VII, Bayon period.

This Sanskrit inscription, employing Pallava script, is dedicated to a local ruler of Si Thep while also mentioning King Bhavarvarman I (who ruled from Sambor Prei Kuk). As such it can be dated to the late 6th or early 7th century and demonstrates the early Chenla influence over this important Dvaravati site. The precise provenance is recorded as being Ban Wang Phai, Bo Rang Wichianburi District, Phetchabun Province.

The National Museum houses one of several early inscriptions originating in the Noen Phaniat/Wat Thong Thua area of Chanthaburi Province. This early 7th-century stele mentions Isanavarman I and is also written in Sanskrit with Pallava script.

A Khmer language and Sanskrit script stele originating in Ayutthaya (precise location unrecorded) and displaying the date 937. It is highly unlikely that the Khmer ruler Jayavarman IV’s influence extended this far at that time so the stele was probably either inscribed by a local ruler using Khmer text or perhaps deposited here at some stage by a Siamese general or ruler. The text is Shivaite in nature so the latter would be a distinct possibility.

Known as the San Sung inscription this Sanskrit stele originates in Lopburi and is dated to the reign of Suryavarman I who extended Khmer influence into what is now central Thailand during this period.

The central colonette and apsara or devata relief show a 12th-century art style (probably Angkor Wat) and are thought to have originated from Phimai. On either side, a pair of round door colonettes show possible 8th-century features. (They are, incorrectly we feel, labelled as window balustres.)

Note that the above selection of Khmer artefacts in the National Museum Bangkok is far from comprehensive and – as mentioned earlier – the sculptures the museum chooses to exhibit at any given time is a fraction of the collection in storage. Furthermore, in addition to the larger, more impressive artefacts featured above, a number of smaller carvings, as well as Angkor-period pottery, is also on display.

Finally, we would also point out that all our images are from the Lopburi/Khmer hall with additional rooms featuring Dvaravati, Srivijaya, Sukhothai, Ayutthaya etc periods.

A visit to all or any of the above museum halls can be included in the All Points East Bangkok tour. 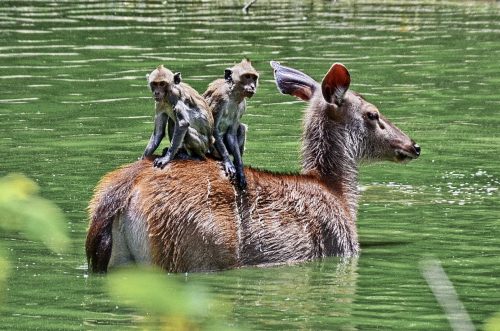