We were going to call this post ‘Thailand – meals and eating habits’ but the following goes for pretty much anywhere in Southeast Asia. For those of us brought up in ‘Western’ countries meals traditionally come at set ‘mealtimes’ and consist of foodstuffs and items considered appropriate for that particular meal time.  i.e. breakfast, lunch and dinner. Obviously there isn’t an absolute consensus on names, even in English speaking parts of the world and ‘dinner’ may often be used for lunch times, (e.g. we always said school dinner even if it was a mid-day meal), whilst the evening meal is sometimes called ‘tea’ or ‘supper’. Eating habits are also a generation thing and we recall that one of the best things about staying with the grandparents was that it involved extra meals that we never got at home – ‘elevenses’ (adults would drink coffee and us kids would have OJ and biscuits), afternoon tea – cakes and cucumber sarnies and even on special occasions supper – as in an evening snack before bed.

Again in our grandparents day lunch – i.e. middle of the day – was the most important meal of the day whilst these days it’s probably the least and many people will only eat 2 meals a day. Now breakfast comes in fairly rigid set formats: ‘English breakfast’ or US diner-style fry up – various elaborations on a basic bacon n’ eggs base, ‘continental’ – (actually French style), bread and jam, (since German, Swiss or Scandinavian breakfasts may traditionally involve cheese and cold meats), or cereal/muesli type meals. In former times cornflakes etc but increasingly in our health-conscious age muesli/yoghurt/fruit variations. Shepherds pie or pizza is not traditional accepted breakfast food nor is muesli usually a dinner option.

All the above was really in order to be able to make a comparison with say Thailand where, firstly the 3 meal a day doesn’t really apply and where particular foods and dishes are much less associated with certain meal times. This occurred to me after a late night and rather confusing discussion with Travelfish about Thai breakfasts!  (Went something like this…)

“Where do Thais go for breakfast?”
“Well they don’t really do breakfast”
“Well they must have breakfast – what do they eat?”
“They don’t have the same concept of breakfast as us….”
“…..yes but they must eat somewhere in the mornings!”
“Yes, but it wouldn’t be a ‘breakfast’ spot – might be the same place they’d go for lunch….”

Traditionally Thais first meal of the day would be the left-overs from the previous evening’s dinner.  They cook fresh rice and eat cold curries and vegetables from the night before. What we meant was they don’t really have accepted ‘breakfast dishes’ as us westerners do. If you selected the Asian breakfast option from a hotel menu it would likely be rice soup, (rice porridge – congee whatever they want to call it), which is probably your best bet for identifying a  Thai breakfast, though it’s also a popular evening snack and could easily be ordered for lunch. In Cambodia for example, you won’t find many local restaurants doing noodles in the afternoon so there is a tendency to; noodles – morning – rice afternoon, and there are a few other examples along the same lines but you can see what we’re getting at.

The original point of the post was that this 3 meal a day regime is not typically Asian – they snack – tending to eat smaller meals at regular intervals throughout the day so: breakfast, brunch, lunch, ‘tiffin’, dinner, supper – everything goes! Here a fried rice, there a noodle soup, everywhere a som tam etc.  Now we’ll turn to an unlikely source. According to well known social historian and food expert Keith Richards, (yes as in the Rolling Stones), this is also a relatively recent innovation in the west and came about when the masses needed more regimented meal systems to fit in with the new factory working conditions.

“We’ve been trained from babyhood to have three square meals a day, the full factory – industrial revolution idea of how you’re supposed to eat. Before then it was never like that, You’d have a little bit often, every hour. But when they had to regulate us all, “Ok mealtime!” That’s what school’s all about. Forget the geography and history and mathematics, they’re teaching you how to work in a factory. When the hooter goes you eat. For office work or even if you’re being trained to be a prime minister, it’s the same thing.” (Keith Richards – ‘Life’) Right on Keith!

So, the style of Southeast Asia Meals is pre-industrial and more natural. Same as their sleep patterns. 8 hours – see above quote! Many Asians tend still to sleep when they can and work when they have to and like babies, they eat when they’re hungry and sleep when they’re tired, irrespective of accepted Western norms of mealtimes and sleep times. As, according to Keith, our pre-19th-century farming ancestors did. Interesting! 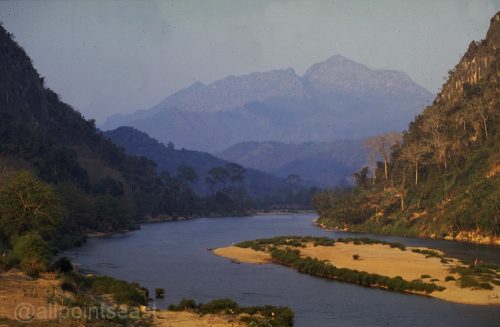 Boat journey down the Ou River in Northern Laos 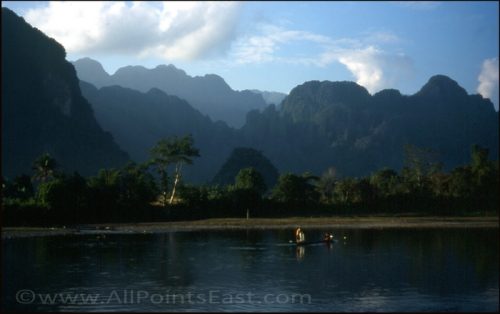